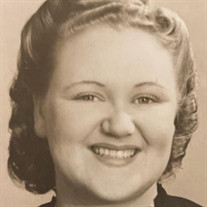 Colleen Clark Ferguson of Hueytown, Al. passed away peacefully on May 2, 2022 at the age of 94. She was preceded in death by her parents Mr. and Mrs. Walter Clark, sisters Joyce O’Shea and Daphne Heinrichs all of Sydney, Australia, a son-in-law Gary Grable, step-daughter Bunny Barlow and her beloved husband Elmer Joseph Ferguson of Birmingham, Al. She is survived by her sister Yvonne Clark of Sydney, Australia, her four children George Ferguson (Sharon), Daphne Ferguson, Joe Ferguson (Betty), Matt Ferguson (Ashley), step-daughter Evelyn Joe Lloyd, and 10 grandchildren, Brad (Michelle), Victor, Stephen (Tracy), Scott (Kelly), Stacey (Archie), Sam (Nikki), Wade (Jamye), Andy (Amanda), Owen (Leah) and Rhys. She is also survived by 14 Great Grandchildren and four Great, Great Grandchildren, as well as numerous nieces and nephews. Colleen was born May 18th, 1927 in Sydney, Australia where she lived until age 19. During W.W. II, in a local Sydney park, Colleen met and fell in love with her future husband who, at the time, was serving in the United States Navy. Their chance meeting led to a blossoming romance and an eventual marriage that lasted over 54 years. In l947 she traveled half way around the world to Birmingham, Al. to marry Elmer Joe. She entered the United States and gained her US citizenship under the War Brides Act of l946. Colleen was a loving mother, grandmother and wife. Over her life she enjoyed many interests such as reading, traveling, baking, gardening, ceramics, floral arranging, playing golf, and going to the beach. Most of all she enjoyed spending quality time with her family. For a number of years, she worked as an Avon lady and then as a sales associate at J.C. Penny Co., in 5 Points West. She will be remembered for her warm hugs, her infectious laugh and for her kind and caring demeanor. A Memorial Service will be held Monday May 9th 2022, at Pleasant Grove Church of the Nazarene, Pleasant Grove, Al. Visitation begins at noon, with the service starting at 1:00 p.m.

Colleen Clark Ferguson of Hueytown, Al. passed away peacefully on May 2, 2022 at the age of 94. She was preceded in death by her parents Mr. and Mrs. Walter Clark, sisters Joyce O&#8217;Shea and Daphne Heinrichs all of Sydney, Australia, a son-in-law... View Obituary & Service Information

The family of Colleen Ferguson created this Life Tributes page to make it easy to share your memories.

Send flowers to the Ferguson family.