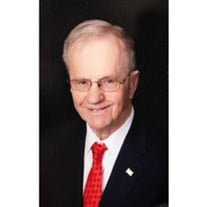 Edgar Gaines Aldridge, 85, of Birmingham, AL began his journey into his eternal home with Jesus Christ on November 27, 2018. Eddie is survived by his wife of 37 years, Kay Shackelford Aldridge; his sons, Jimmy Rockett (Danna) and Jay Rockett; his grandchildren, Mallory Evans (Bradford), Kayla Neighbors (Jared) and his brother-in-law, Dr. Jesse Shackleford Jr. (Elaine), along with cousins from Boaz, AL. Eddie was born on August 26, 1933, in Bessemer, Alabama to Zeta and Loren L. Aldridge. He became a Christian at an early age and remained faithful to Riverchase United Methodist Church throughout his life, reflecting the Godly teachings of his parents and grandparents. Eddie derived pleasure and peace from gardening, reading, and studying the Holy Bible. After graduating from Bessemer High School, Eddie attended Auburn University to study Ornamental Horticulture. Later, he left Auburn to join the U.S. Army where he served on the west coast and then in Germany. When he returned home, he began working in the family business and attended and graduated from Birmingham Southern College. Growing up in the greenhouse business, Eddie acquired an interest in hydrangeas. He would ride with his brother to the local Trailways Bus Station to pick up dormant plants to be forced for Mother's Day. In 1969, he and his father discovered a native Oak Leaf Hydrangea, Hydrangea Quercifolia, completely different from the native species. The plant was known as a "chance seedling." In 1971, Eddie and his father patented this Hydrangea and named it Hydrangea Quercifolia "Snowflake" and today, it is grown worldwide. He worked in his successful business for many decades and operated it from 1978 until 1995. For years, Eddie and Kay traveled the world to witness some of God's greatest creations. Eddie received many awards during his lifetime, but the greatest reward was sharing his many blessings with others and making a lasting difference in the world. Among his most meaningful accomplishment was the establishment of Aldridge Gardens in Hoover, Alabama as a public garden in perpetuity in memory of his family. During his career, he received many awards, but the most significant were from the Woman's Committee of 100 Small Business Award for 1980 - 81, Garden Club of America Award, Lifetime Achievement Award - Alabama Nursery Association, Environmental Award from Auburn University, along with his father, Hall of Honor- Auburn University, Daughters of the American Revolution Award-state and national, and Urban Beautification Award from the American Horticultural Society. Eddie was president of the Alabama Nursery Association in 1975. Thanks to Always Best Care for taking care of Eddie during this difficult time. Memorial gifts can be made to Riverchase United Methodist Church or Aldridge Gardens. A Celebration of Life service will be held on Thursday, December 6, 2018 at 11:00 a.m. with a light lunch following at Riverchase United Methodist Church, 1953 Old Montgomery Hwy, Birmingham 35244.

The family of Edgar Gaines Aldridge created this Life Tributes page to make it easy to share your memories.

Send flowers to the Aldridge family.