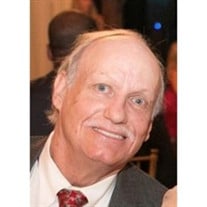 Francis Andrew Colpack, “Drew” to his friends and “Drew-baby” to his family, died peacefully on December 4, 2019 at his home in Avondale.  He was born in Bessemer, Alabama on November 16, 1947, the last of five children born to Frances and Steve Colpack.  Drew attended Bessemer High School and Jacksonville State University, where he was a standout baseball player.  He worked in the apparel business with his father for many years, but had a host of other enterprises, from selling turquoise jewelry upstairs at the Cadillac Café in Five Points South, to buying and selling cars.  In later years, he was well known for detailing cars and for “going to work” at Tricia’s Treasures in Homewood.  He was a talker, a great storyteller and very funny. He loved music and taught himself to play guitar and drums.  Drew was pre-deceased by his parents, his brother Pat Colpack and his brother-in-law Cecil Murdock.  He is survived by his sisters Stephanie Murdock and Jerry Justice (Eugene), sister-in-law Becky Colpack, his brother Mickey Colpack (Judy), a host of nieces and nephews, the wonderful crew at Tricia’s Treasures and his car clients, many of whom became dear friends.  He will be especially missed by his best friend Tina Burleson, his cats Lulu and Sammi and his niece Kim Justice Rogers, who never gave up on him. In lieu of flowers, please consider a donation to the Community Furniture Bank,  www.communityfurniturebank.org 219 Distribution Drive Birmingham AL 35209 or Kitty Kat Haven & Rescue,  www.kitkathavenrescue.org 2113 Marlboro Street Birmingham AL 35226.  Visitation will be at Our Lady of Sorrows Catholic Church in Homewood on Monday, December 9th at 10:00 a.m. with Funeral Mass at 11:00 a.m. Private family burial at Highland Memorial Gardens will follow.

The family of Francis Andrew "Drew" Colpack created this Life Tributes page to make it easy to share your memories.

Francis Andrew Colpack, “Drew” to his friends and “Drew-baby”...