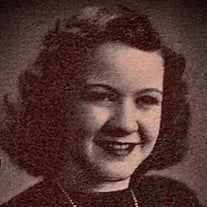 Jacquelyn McElroy Lampkin, 91, passed away on her birthday, October 14, 2021. Jacquelyn known as "Jackie" was born October 14, 1930 to Eulalia Copeland McElroy and Rowan McElroy. She descended from the early founders of the State of Alabama and this country. In 1820 the first capital of the state of Alabama in Cahawba, Alabama was established by her forefathers. The McElroy family descended from landed gentry and aristocracy of Scotland leaving a manor house and land in Ulster, Ireland and settling in Maryland in the early 1700's. Jacquelyn was of Scott Anglo Norman descent from the de Coupland family of Copeland Castle and the porcelain manufacturer Copeland Spode of England. She shared common ancestors with her husband, Paul Lampkin, Jr., through the Sherer's and the Bankhead's with connections to the Magna Carta. After the McElroy family left Cahawba, they settled in Sumter County. The plantation extended into two states. Her grandfather, Isaac McElroy was a college professor at Auburn University and her grandmother, Irene McElroy was a schoolteacher. Her maternal grandfather, T.R. Copeland was Alderman to the City of Bessemer and owner of Bessemer Realty and Insurance Company. It was T.R. Copeland who signed the mortgage on the Majestic Sandstone Methodist Church of Bessemer. Whereas, her grandmother, Margaret "Molly" Cox Copeland descended from the early families of Virginia Jefferson Davis and Mary Todd Lincoln. Jackie had a great love of life. She was a musician and artist who enjoyed tennis, golf, hunting and fishing. A recipient of a full scholarship to Birmingham Southern College she chooses instead to marry the great love of her life, Paul S. Lampkin, Jr. Later attending the University of Alabama in Birmingham. Jackie is of the Methodist faith. She is predeceased by her husband and great love, Paul S. Lampkin, Jr., her best friend and beloved brother, Dr. T. R. McElroy; her sister, Carolyn McElroy Christopher, whom she dearly loved; her brother-in-law, Dr. A. M. Christopher; her nephews, Richard Christopher and David Christopher. Jackie is survived by her much loved daughter, Paula F. Lampkin, Esquire; her favorite nephew, Steven M. Christopher and his wife, Michelle and her four-legged daughter and companion, Missy Carter. Funeral arrangements will be Monday, October 25, 2021 with visitation one hour prior to the 2:00 p.m. service at Bessemer Brown Service Funeral Home. Rev. Richard Hanna will be officiating the service. Burial will follow at Cedar Hill Cemetery. In lieu of flowers you may wish to donate to Dana Darby Pound at the Hill Animal Rescue in Bessemer, Alabama.

Jacquelyn McElroy Lampkin, 91, passed away on her birthday, October 14, 2021. Jacquelyn known as "Jackie" was born October 14, 1930 to Eulalia Copeland McElroy and Rowan McElroy. She descended from the early founders of the State of Alabama... View Obituary & Service Information

The family of Jacquelyn McElroy Lampkin created this Life Tributes page to make it easy to share your memories.

Jacquelyn McElroy Lampkin, 91, passed away on her birthday, October...

Send flowers to the Lampkin family.