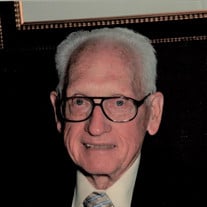 James Thomas Gordon, 89, a longtime resident of Hoover, went home to be with his Lord and Savior, Jesus Christ, on Friday, March 11, 2022. He was born on December 31, 1932, in Hueytown, Al, son of Seth Calvin Gordon and Kathleen Elisabeth Jones Gordon. He was raised in Hueytown, Al and graduated from Hueytown High School. He then graduated with a Bachelor of Science of Biology with a minor in Chemistry from University of Alabama, Tuscaloosa, Al. After graduation James served in the US Army from September 1956 to September 1958. He then wed the love of his life Gladys Rae Nelson in 1958 and they were happily married for 60 years. James worked for Hercules Powder Company / Hercules Incorporated for 32 years. Prior to retiring to Hoover, James and Gladys lived in Hercules, CA, Louisiana, MO, Belle Vernon, PA and Lawrence, KS. James was a member of Bluff Park United Methodist Church. His hobbies included fishing and hunting with his sons. He also enjoyed traveling in the US and abroad and taking cruises with his wife and family. James is survived by his two sons, Barry Gordon and Gary Gordon; his daughter, Debra Gordon; his grandchildren, Amanda Kate (J.B.) Pannell, Chelsea Gordon and Seth Gordon; his great granddaughters, Annabelle Evie Carnes and Lauryn Pannell; his sister, Wanda Jo Williams and his sister-in-law, Margene Gore. James was predeceased by his wife, Gladys Nelson Gordon; his son, Ronald Seth Gordon, and his granddaughter, Ashley Anne Gordon. A memorial graveside service will be held at 11:00 am on Wednesday, March 16, 2022 at Valhalla Cemetery. Reverend Reid Crotty will be officiating. In lieu of flowers, memorial gifts may be made to Wounded Warrior Project, PO Box 758516, Topeka, KS 66675.

James Thomas Gordon, 89, a longtime resident of Hoover, went home to be with his Lord and Savior, Jesus Christ, on Friday, March 11, 2022. He was born on December 31, 1932, in Hueytown, Al, son of Seth Calvin Gordon and Kathleen Elisabeth Jones... View Obituary & Service Information

The family of James Thomas Gordon created this Life Tributes page to make it easy to share your memories.

Send flowers to the Gordon family.