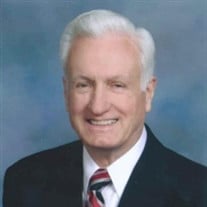 Lee R. Bullock, Jr. passed away on April 16, 2018.  Born in Grinnell, Iowa on November 23, 1934, he was the son of Lee and Alzada (Manley) Bullock.  Lee is preceded in death by his parents, two brothers (Harold and Robert), and two sisters (Margaret and Mary Jane).  Lee proudly served four years in the United States Air Force.  Following his service, Lee attended the University of Alabama, graduating in 1960 with a degree in accounting.  On June 4, 1960, Lee married his soulmate, the love of his life, Barbara Helen Hamm of Montgomery.  He earned a law degree in 1964 from Jones Law School, and a Masters in Business Administration from Samford University in 1972. Lee was the father of two sons, Lee Allen Bullock and Gary Morgan Bullock (Stacie), and was the proud grandfather of six grandchildren:  Mary-Morgan, Laura Grace, Landon Grey, Sarah Beth, Manny, and Ella Bullock. Lee joined Briarwood Presbyterian Church in 1978, after accepting Jesus Christ as the Lord of his life. As the administrator of a statewide contractors self-insured workers compensation fund, Lee initiated the first employee drug testing program in the state of Alabama, bringing greater safety to employees and the public, as well as greater profitability for contractor/owners.  He was recognized by the Federal Bureau of Investigation for this achievement, but chose to extend the honor to the contractors association itself.  He served as the Director of the contractors association for 25 years and Administrator of the workers' compensation fund for 20 years.  During his career, he initiated several self-insurance funds across a wide range of industries, as well as co-founding the Alabama Reinsurance Trust Fund. A loving husband, father and grandfather, Lee was also an especially faithful friend who could always be counted on, as testified by the many whose lives he impacted. Lee is survived by his wife, two sons, and six grandchildren. Committal service will be Tuesday, April 24, 2018 at 11:00 a.m. at Alabama National Cemetery, Montevallo. A memorial service will be in the chapel at Briarwood Presbyterian Church at 2:00 p.m. Wednesday, April 25, 2018. The family will receive friends Wednesday from 1:00 p.m. until 2:00 p.m. at the church. In lieu of flowers the family requests that memorial contributions be sent to Christian Medical Ministries of Alabama in care of Briarwood Presbyterian Church 2200 Briarwood Way, Birmingham, AL 35243 (205) 776-5200.

Lee R. Bullock, Jr. passed away on April 16, 2018.  Born in Grinnell, Iowa on November 23, 1934, he was the son of Lee and Alzada (Manley) Bullock.  Lee is preceded in death by his parents, two brothers (Harold and Robert), and two sisters (Margaret... View Obituary & Service Information

The family of Lee R. Bullock, Jr. created this Life Tributes page to make it easy to share your memories.

Send flowers to the Bullock, family.