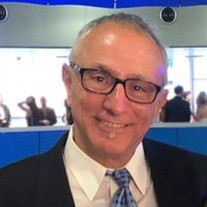 Mark John Betters, 65, passed away peacefully on March 21, 2020 surrounded by his loving and devoted family. He was born February 4, 1955 in New Castle, PA, but has lived in the Birmingham area since 1989. He was a graduate of New Castle Senior High School’s Class of 1973. He continued his education at Ohio Institute of Technology, graduating with a degree in Electrical Engineering. He moved to Tampa, FL where he met his wife of 23 years, Debbie Mosher. They went on to have three daughters.After working as an ultrasound engineer for several notable corporations, he branched out on his own. In 2002, he created DKB Technologies LLC, a medical imaging company servicing facilities throughout the Southeast.In addition to a successful professional career, Mark enjoyed a number of activities with his family and friends. His hobbies included boating, restoring old cars including his prized Mustang Christine, running 5Ks, woodworking, and watching University of Alabama, Penn State University, and Pittsburgh Steelers football. However, Mark’s true joy in life were his children and grandchildren.To Mark, his family was everything, and to his daughters, Father’s Day was every day. He made his wide circle of family and friends feel special, valued, and loved, but most of all, he made them laugh. His sense of humor was unparalleled, and you could not be around him without laughing!His devoted daughters include Kristen (Rocky) Springer, Ashley (Jonathan) Koh, and Laura Betters (Grey Standridge). He is also survived by 3 grandchildren: Ryan, Dylan, and Henry; the mother of his children and close friend, Debbie; his fiancé and soulmate Angie Champion; two sisters Fatima (Everett) Rea of Dayton, OH and Denice Jordan of Tampa, FL; one brother Matthew Betters of Tampa, FL; the girls’ grandmother Barbara Mosher; 9 nieces and nephews; and numerous cousins and relatives in Aliquippa, PA. He was preceded in death by his parents, Anthony J Betters Sr. and Sadie E Betters; brothers Anthony J Betters Jr. and Lance Cpl. Michael J Betters.A Celebration of Life in Birmingham, AL and internment in New Castle, PA will be scheduled at a time when Mark’s friends and family can safely gather.In lieu of flowers, the family requests donations be made to one of the following organizations that Mark lovingly supported: St. Jude Children’s Research Hospital and Sav-a-life Pregnancy Resource Center in Vestavia, AL.

Mark John Betters, 65, passed away peacefully on March 21, 2020 surrounded by his loving and devoted family. He was born February 4, 1955 in New Castle, PA, but has lived in the Birmingham area since 1989. He was a graduate of New Castle Senior... View Obituary & Service Information

The family of Mark John Betters created this Life Tributes page to make it easy to share your memories.

Send flowers to the Betters family.