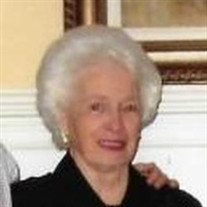 Martha Anne Harper Holt went home to our Lord on January 22, 2018. Martha was born on October 17, 1923, in Bessemer, Alabama. She was preceded in death by her parents, Joe Harper and Daisy Johnson Harper; her sisters, Edna Roy, Frances Olvey and Billie Ruth Clark and her husband, James L. Holt. Martha grew up in Bessemer, in a very loving family. She was a kind and obedient daughter, a thoughtful and encouraging sister, a devoted wife and a fierce and protective mother. For Martha, family was everything. In addition to her family life, Martha also had a career. She was president of the Business and Professional Women of Birmingham for a time. For many years, she worked in the rare book community of Alabama. Later, she managed apartments throughout the Birmingham area. After retirement, she volunteered at Shelby Baptist Hospital for another ten years. Of course, she became president of the volunteer group. In her later years, Martha was diagnosed with Dementia/Alzheimer's disease. She was provided wonderful and loving care by the staff and caregivers at Bickford/Charter/Allegro Senior Living and by Homestead Hospice Care. Martha's family will be forever grateful to the kind souls who cared for her in these last years. Martha is survived by her son, Joe Goodwin; daughter-in-law, Carole L. Goodwin; son, Tom L. Goodwin; son, Daryl E. Goodwin and daughter, Alva G. Harper. Grandchildren: Amanda (Josh) Rodriguez, Meaghan (Jared) Boyd, and Lauren(Rick) Rollins. Six great-grandchildren, three step children and many nieces and nephews. Visitation will be at Bessemer Brown Service Funeral Home in Bessemer, Alabama on Friday, January 26, 2018 between 11:00 AM and 12:00 PM. Graveside services will follow at 12:30 PM at Cedar Hill Cemetery. In lieu of flowers, the family requests that donations be made to fight the disease of Dementia/Alzheimers.

Martha Anne Harper Holt went home to our Lord on January 22, 2018. Martha was born on October 17, 1923, in Bessemer, Alabama. She was preceded in death by her parents, Joe Harper and Daisy Johnson Harper; her sisters, Edna Roy, Frances Olvey... View Obituary & Service Information

The family of Martha Anne Harper Holt created this Life Tributes page to make it easy to share your memories.