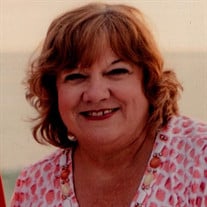 Mary Lynne Fisher Hayes passed away on January 5th, 2022. Born on April 17, 1955 in Bucksville, Alabama, Mary Lynne was a graduate of Brookwood High School (Class of 1973). Mary Lynne met her husband Bill while working at South Central Bell. Once her children were school aged, she enjoyed volunteering her time at Shades Mountain Christian School. You could often find her in the front office or library during the day or in the concession stand at night during the home sporting events of her daughters. After she retired, she often remarked how she missed interacting with the students and parents of the school. Mary Lynne was a member of Shades Mountain Community Church and was an adult leader in the youth group while her daughters were growing up. She could often be found on “the rock” on Wednesday nights eating dinner with her family and catching up with any students that stopped to talk. She was also able to attend several missions trips, often being the cook. No one ever went hungry around Mary Lynne. For the past several years, Mary Lynne had been working with an estate sale company where she never met a stranger. She enjoyed her time meeting new people and getting to know the “regulars”! Mary Lynne is preceded in death by her husband, Bill Hayes, parents, George and Melba Fisher, and her sister Virginia Barnes. She is survived by her daughters, Amanda and Ashley, and her “precious angel” of a granddaughter, Anna Brooks. Survivors also include her brother, Mike (Regina) Fisher, sister, Sharon (Joel) Rosser, a host of special nieces and nephews, great nieces and nephews, and many friends. Funeral services will be held on Friday January 7th at Bessemer Brown Service Funeral Home in Bessemer at 2:00 p.m. with a graveside to follow at Bucksville Cemetery. A visitation for friends will be held at 1:00. In lieu of flowers, please consider donating to Rumpshaker, Inc. P.O.Box 13023 Birmingham, AL 35202

The family of Mary Lynne Fisher Hayes created this Life Tributes page to make it easy to share your memories.

Send flowers to the Hayes family.