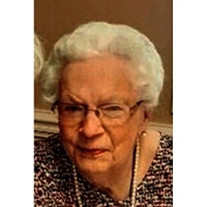 Mittie Flora "Buck" Trull McDaniel passed away peacefully in her sleep this morning July 18, 2019, at Self Health Care in Hueytown, Alabama. She had a long battled with complications of congested heart failure. She was born in Kennedy, AL in Lamar County, to Claudie Edgar Trull and Minnie Dell Fowler Trull on July 20, 1926. She would have been 93 in two days. Buck was married to Raymond Ray McDaniel for 43 years. They met in their hometown of Kennedy, AL and eloped to Columbus, MS on Jan. 23, 1945. In earlier years she was President of the Ladies Auxiliary for Veterans of Foreign Wars. She was always very patriotic and supportive of our veterans. Through the years she worked at Hancock Fabrics and later worked as an aide at Estis Nursing Home. Her hobbies were cooking, sewing, knitting, and crocheting . She enjoyed gospel and country music and could play the piano and enjoyed singing with quartets in her younger years growing up in Kennedy, AL. She loved to dance and got the nick name "Buck" as a little girl for being the best buck dancer in the community. She enjoyed camping, fishing and traveling. Buck loved her little Senior Bus trips over the years. She has had many names over the years, but excelled in them all, daughter, wife, Mittie Flora, Flo, Buck, Mom, Nannie, grandnannie, Ms. Mittie. She showed great pride in her profession of faith she took on August 27, 2015. She was baptized and joined Union Hill Baptist Church. She was preceded in death by her husband, Raymond Ray McDaniel; her parents, Claudie Edgar Trull and Minnie Dell Fowler Trull and her sister, Sylvia Lee Trull Cunningham (Joe). Buck is survived by her daughter, Flora Jane McDaniel Holmes (Don); her son, Benny Ray McDaniel (Jonanna); five grandchildren, Sylvia LaDonna Holmes Tedder (Scott), William Bart Holmes (Heather), Zachery Ray McDaniel, Jesse Joe McDaniel and Brandy Dawn McDaniel; seven great grandchildren, Mary Katherine Tedder, Elizabeth Anne Tedder, Harrison Ray Holmes, Kennedy Marie Holmes, Haley Alexis McDaniel, Kayden Elizabeth McDaniel and Paxton Grace McDaniel; four step-grandsons; two step-granddaughters; numerous step-great grands and great great grands; her sister-in-law, Dorthy Foster McDaniel; nieces, Kathy Cunningham (daughter Kaitlyn) of Austin, TX, Camellia Bobo of Florence Alabama, and Charlotte McAdams (Steve) of Atlanta, GA; nephews, Jay McDaniel (Carol) of Nashville, John McDaniel (Wanda) of Kennedy, AL and Tommy Cash (Jo) of Gadsden, AL Pall Bearers will be, John McDaniel, Bobby McDaniel, Jay McDaniel, Tommy Cash, Bart Holmes, Jesse McDaniel and Zac McDaniel. We love you mom. Thanks for all the love and support over all the years you were with us. You lived a long and blessed life, and we will see you again one day. Funeral service will be Tuesday, July 23, 2019 at 2:00 p.m. with burial following at Valhalla Cemetery. Bro. Mike Stevens will be officiating the service. The family will receive friends Tuesday from 1:00 p.m. until service time at the funeral home. Special thanks to all who helped with her care. Medical West Hospital, Self Health Care and Rehab Center, and Southern Care Hospice. In lieu of flowers the family request that donations be made to Union Hill Baptist Church building fund.

Mittie Flora "Buck" Trull McDaniel passed away peacefully in her sleep this morning July 18, 2019, at Self Health Care in Hueytown, Alabama. She had a long battled with complications of congested heart failure. She was born in Kennedy, AL in... View Obituary & Service Information

The family of Mittie Flora "Buck" Trull McDaniel created this Life Tributes page to make it easy to share your memories.