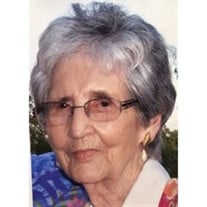 Phyllis Sellers Mayfield died peacefully at her home in McCalla, Alabama on Monday, Feb. 17, 2020, after an illness that debilitated her physically but never took away her strength of mind, her devotion to her family and friends, and her eternal Christian faith. She was 90 years old, and leaves behind a spiritually-moving legacy that greatly enriched the lives of everyone she knew. Visitation is scheduled for  10 a.m. this Friday, Feb. 21, 2020, with services at 11 a.m. at the Baptist Church of McAdory in McCalla, with Dr. Bill McCall and Dr. Buddy McGohon officiating. Burial will follow at Jefferson Memorial Gardens in Hoover. Survivors include her husband of 71 years, Dr. Dewey E. Mayfield Sr., sons Dewey (Eddie) Mayfield Jr. (Vicki), Terry (Debbie) Mayfield, and Mark (Monica) Mayfield; her grandchildren, Heather (Jeff) Kendrick, Amber (Kevin) Wiley, Trey (Kelly) Mayfield, Rebecca (Derek) Millwood, Elizabeth (Dan) Pruitt, Michael (Gina) Mayfield, Zac Mayfield, Lauren Mayfield, Matthew (Rachel) Mayfield, Stephanie (Chris) Senn, Madison Mayfield, and Alexa Mayfield, and 26 great-grandchildren. Phyllis was preceded in death by her son Larry Mayfield in 1984.  Phyllis was born on May 31, 1929 to parents Sebron Albert Sellers Sr., and Anna Franklin Sellers. The youngest of 11 siblings, Phyllis graduated from Jones Valley High School in Birmingham, Alabama in 1947 and was married to Dewey E. Mayfield on May 21, 1948. She attended special studies at the New Orleans Baptist Theological Seminary while Dewey pursued his studies for the ministry there.  She was a devoted homemaker and pastor’s wife who also found her own calling in childhood education. She studied early childhood development at Snead College in Boaz, Alabama and served as founder and director of the Childhood Development Center in Springville. She later served as director of Hillsboro Heights Early Child Development Center in Huntsville,  and founder and director of Calvary Baptist Childhood Development Center in Dothan,  from 1982-1996. Earlier, she worked as a First National Bank teller in the West End Branch in Birmingham, and as head teller of First Alabama Bank in Huntsville. Phyllis took an active, important role in the Southern Baptist churches in which she and Dewey served — as a Sunday School teacher, as a leader in the Women’s Missionary Union (WMU) and Marriage Enrichment Retreats, as past president of Alabama Baptist Mission Director Wives, and a member of the Alabama Baptist Education Commission.

Phyllis Sellers Mayfield died peacefully at her home in McCalla, Alabama on Monday, Feb. 17, 2020, after an illness that debilitated her physically but never took away her strength of mind, her devotion to her family and friends, and her eternal... View Obituary & Service Information

The family of Phyllis Sellers Mayfield created this Life Tributes page to make it easy to share your memories.

Phyllis Sellers Mayfield died peacefully at her home in McCalla,...

Send flowers to the Mayfield family.