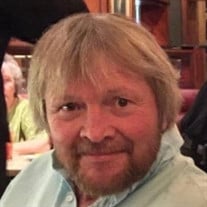 Robert Elton Bearden, 63, of Hoover, AL passed away April 19th, 2022 after a prolonged illness. His loving family were present and were with him at his time of passing. Friends and loved ones remember him as a gentle soul with an infectious laugh. Full of unique quirks, Robert will be remembered for having a big heart , loved by family and friends. You never knew what to expect from Robert as he was a man who generally lived his life at his own pace and on his own terms and didn’t much concern himself with what others thought about him. He had a style all his own, a fedora hat enthusiast who at times has been compared to a young Abe Lincoln, Robert Bearden was quite the character. Ever the community activist and amateur sleuth, he even appeared on the local news bringing awareness to invasive odor pollution plaguing his neighbors from a junkyard down the street. Robert was always looking out for those around him. He knew how to have a good time and you were probably going to have a good time if you spent it with him and you were surely going to laugh and hopefully you didn’t get in trouble. You might get a random phone call in the middle of the night just to check on you so he could tell you he was thinking about you and that he loved you. You knew you could always depend on him remembering your birthday no matter if you hadn’t seen him in months and were several states away. He enjoyed playing pool, rambling around in his jeep, and could pick just about any lock he came across. He was a city boy with country roots, who could keep you laughing with his practical jokes and tales of his various goats and chickens that always seemed to be getting into shenanigans. Robert could make you smile just as easy as he could make you shake your head at the antics he somehow managed to get himself into. There weren’t many people like Robert Bearden and there won't be anyone like him again. His family and friends will definitely miss him. Robert grew up and lived his life in and around the Birmingham area. He attended Shades Valley High School, is retired from Jim Walter mine #3 and later worked for several years at J & J Pharmacy in Lipscomb. He is survived by his two sons which he loved more than anything and would do anything for, Brett Adam Bearden and Jeremy Chad Bearden. He is also survived by his older sister, Diane Bearden Stonicher; his younger brother Kevin Lee Bearden; as well as his niece Shelly Rena Powers and his nephews, Steven Christopher Baggett, Christopher Chad Bearden, and Aaron Blake Bearden . Robert may no longer be with us down here on Earth but he will be greeted in the afterlife by his dear family who have preceded him in death including his parents, Elmer Doyle Bearden and Betty Jean Bearden; his loving wife of many years Nedda Justice Bearden; brother Gary Doyle Bearden; and sister, Karen Lynn Baggett as well as his brother-in-law Gary Alan Stonicher. This will be a joyful reunion. His family welcomes those who knew him in their loving remembrance and celebration of Robert’s life. Funeral service will be Friday, April 22, 2022 at 2:00 p.m. at Bessemer Brown Service Funeral Home with burial following at Cedar Hill Cemetery. The family will receive friends Friday from 1:00 p.m. until service time at the funeral home. Pastor Steve Logan will be officiating the service.

Robert Elton Bearden, 63, of Hoover, AL passed away April 19th, 2022 after a prolonged illness. His loving family were present and were with him at his time of passing. Friends and loved ones remember him as a gentle soul with an infectious... View Obituary & Service Information

The family of Robert Elton Bearden created this Life Tributes page to make it easy to share your memories.

Send flowers to the Bearden family.