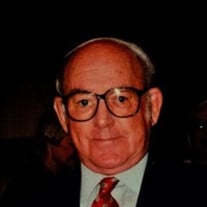 Born February 15, 1924 in LaCrescent, MN.  Bob graduated from Houston High School, Houston, MN, Gonzaga University, Spokane, WA, and attended the University of Alabama, Tuscaloosa, AL.  Bob came to Birmingham, AL in 1947 to begin a career in banking at First National Bank.  During his time in banking, he became involved with McAdory High School in McCalla where he started the first band; later starting the first choir at Pleasant Hill United Methodist.  He would serve as the band director at McAdory from 1947-1959 and as choir director and Sunday School teacher at Pleasant Hill from 1948-1985.  During this time, Bob instituted a revolutionary music therapy for wounded veterans at the Veterans Administration in Tuscaloosa, which is still in effect today.  Bob’s dear friend, Dr. David J. Rowland, was president of Walker College in Jasper, AL and he asked Bob to come to work for him.  While at Walker College, he established their first college band and became the Director of Development for 49 years, retiring in 1993.  Bob’s love for music and high school bands led him to establish the first Honor Band program in Alabama which affected thousands of high school musicians and helped to grow the Walker College footprint in Alabama.  After retirement Bob became active in the West Jefferson Historical Society and started his own band, The Bob Moore Band, comprised of former students which still plays today.  Bob was also active in the Jasper and Bessemer Rotary Clubs, The Zamora Temple, and Kappa Phi Kappa.  Aside from his love for music and teaching, Bob was also an avid horseman and  continued to ride horses until his early eighties.    Bob was the kind of person who could relate to all kinds of people.  He had friends from all walks of life and was equally comfortable in a variety of conversations.  He was a true Renaissance man from Minnesota who made his life and family in Alabama during a time when there was still some resentment toward northerners.  Bob fit in well with the McCalla, Jasper, and Bessemer communities and became very respected for the levels of teaching and achievement at McAdory, Walker College, and Pleasant Hill.    Bob is preceded in death by his parents George & Helen Moore, brothers Alan, Graydon, and Donald Moore and sister Marjorie Moore Baker; his first wife Jean Laugen Moore.  Bob is survived by his loving wife of 51 years Sue Parsons Moore, son Robert Parsons Moore (Brigitte), granddaughters Maggie Moore and Amelia Moore; along with a host of nieces and nephews in Alabama, Iowa, Minnesota and Wisconsin.    In lieu of flowers please send donations to The Bob Moore Project at Pleasant Hill United Methodist Church, 4809 Bell Hill Road, Bessemer, AL 35022.  Services will be at Pleasant Hill, Monday, September 16, 2019 at 11 a.m. with Alan Head, David Thomas, and Bill McCall presiding, with burial at Moore’s Cemetery in McCalla. The family will receive friends Monday from 10:00 a.m. until service time at the church.

The family of Robert Wayne Moore created this Life Tributes page to make it easy to share your memories.

Send flowers to the Moore family.